Blog - Latest News
You are here: Home / A weird bandname, do or don’t? (A list of ten weird ones)

Imagine starting a band. You assembled musicians and now you need a name. This is a tricky part, because what if your band makes it big and there will be merchandise! Fans sporting your bandname on their shirts, coffeemugs with the name on it and posters all around town. The last thing you want is an embarrassing or stupid name for your band, right? You want something cool, but also something that sticks and something people will remember… Weird names tend to stick, but should you do it or not?

Let’s take a look at ten weird bandnames that make you scratch your head.

This band is famous for their song The Reason, a nice rockbalad from 2003. You probably recognise the song, but the bandname is nothing short of weird. The Californian foursome claims that there is absolutely no reason behind this name, though. It was a highschool in-joke, that just stuck.

This bandname does have a backstory. The combination Alt-J is needed on an Apple-computer to produce a Delta, the scientific symbol for change. Alt-J tries to change the music-scene with their experimental Indie, folk and art-rock.

You will probably be able to sing along to the superhit Tubthumping. Is this title not familiar? How about: “I get knocked down,”? Yes. Thát song. So what about the name? The origins aren’t exactly clear, but rumour has it that it came from a dream in which the mens and womens bathroom were named Chumba and Wamba.

This bandname implies at least something non-threatening, but when you see to what kind of band it belongs, you do a double take. There is no tapdancing whatsoever. Click here to listen the the album Danza III: The Alpha – The Omega by this grindcoreband.

The original plan was to name the band ‘Bowling for shit’, but they dialled it down to soup. A good choice, in our opinion.

Death Cab for Cutie is named after a song by another band with a weird name: Bonzo Dog Doo-Dah Band. The American indierockband started in 1997 and they have 8 albums to their name.

Also shortened to OFWGKTA, Odd Future Wolf Gang Kill Them All is a rapformation from the US. The hip-hop collective is known for their nonchalance. In one of their songs they just call themselves ‘Wolf Gang’, which might be a nod to Mozart, but looking at these guys, we doubt it.

This name stems from the geniusses of Monty Python’s Flying Circus; it’s an Eric Idle-reference. The band formed in 1986 without having a name and Toad the Wet Sprocket was supposed to be something temporary.

Personally we really like this one. A play on both actor Dan Akroyd and the ‘nananana’ heard in the original Batman-theme, it just sticks. The Scottish band exists since 2006 and call the music they make ‘fight pop’.

We’re fairly certain this name does not need an explanation. This band is well-known and well-reviewed within psychedelic rockcircles. Before the name Butthole Surfers stuck, the performed under a new name every liveshow; Ashtray Babyheads, Ed Azner is Gay and Fred Astaire’s Asshole among others. 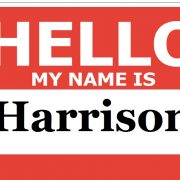