You are here: Home / United Airlines

An engaged couple boarded a flight to Costa Rica, where they were to be married. Boarding a United Airlines flight apparently doesn’t mean that you’ll actually get to stay on the plane, even if you paid for seats. But we knew that already, of course…

According to Michael Hohl and his fiancée Amber Maxwell, they were the last of the passengers to board the United Airlines flight, and they found a person sleeping on their seats. Not wanting to cause any more delay, they found empty seats a few rows back and requested to pay an extra fee for the slightly more expensive, but unused seats.

Apparently the sleeping person was not removed from their original seats, and the lovebirds were not allowed to pay for other seats, so an officer from the U. S. Marshall Service escorted them off the plane. Hohl and Maxwell had to take another flight the next day. According to Unfriendly Airlines the couple just repeatedly tried to sit in more expensive seats for which they hadn’t paid. Also the lovers wouldn’t follow flight crew instructions. Whatever that means. If you find a discrepancy in this story, you’re not the only one.

David Dao, the 69-year old doctor who was dragged off another United Airlines flight, losing two teeth and gaining a concussion in the process, is likely to sue the airline for it’s scandalous conduct. United Airlines has been under scrutiny for a while now, memes popping up left, right and center. We’re wondering how much longer Unkindly Airlines will stay in business. 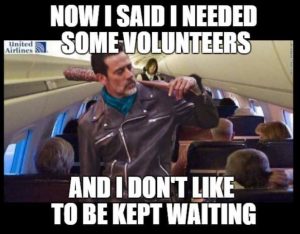 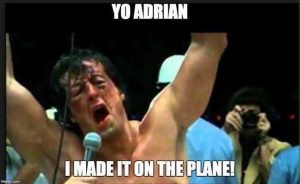 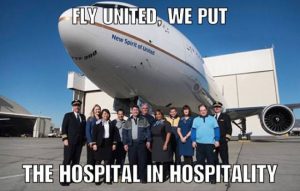