Blog - Latest News
You are here: Home / Why House of Cards and Designated Survivor are IDENTICAL!

While binging both series on Netflix, we have come to the conclusion that House of Cards and Designated Survivor are oddly similar. Of course they are both about the struggles in the White House, but there are certain elements that are a little too similar, if you know what we mean. We made a list and it’s not short. Boy, it’s not…

Warning: SPOILERS! If you’re not up to date on HoC or DS, there are some major spoilers on both series ahead. You are warned.

Frank Underwood and Tom Kirkman have not been elected president. Frank became president after Walker resigned due to a threat of impeachment over alleged illegal campaign donations. Tom was the Designated Surviver during the State of te Union when someone blew up the entire Capitol leaving only him and two congresspeople behind to run the country.

Both presidents have guys called Seth that are close to them. And damn, are they skilled! Seth Grayson is Underwoods Director of Communications, who can accomplish almost anything. Seth Wright was a speech writer, but he stepped up when someone else bungled a pressconference. Now he is the White House Press Secretary under Kirkwood.

There is a Congressman named Peter in both series, and both Peters aren’t behaving like exemplary Congressmen… Peter Russo is the suave divorced thirty-something guy that likes a drink. A lot of drinks. And hookers. Peter McLeish was present during the bombing and the sole survivor of said bombing. This is not a coincidence, of course. Both Peters get murdered, albeit by different people.

If you say Russia, you say Petrov. Apparently it’s the equivalent of the name Smith, or something, because in HoC ánd DS the main Russian guy is called Petrov. President Victor Petrov is the taunting and rigid adversary of Frank Underwood. They have a very strained relationship, which comes to a tumultuous climax further down the road. In DS Ambassador Petrov agrees to a three-way deal for spyswapping, but one-ups Kirkwood on this.

Both presidents have to deal with a cliché Islamic terrorist organisation. In HoC there is ICO and in DS we meet Al-Sakar. There is also a main terrorist arrested and questioned in both series, who is not cooperative at all.

Both presidents get shot and have to undergo a pretty serious surgery. Frank has to get a new kidney, while Tom has to have some bulletfragments removed. Luckily, the surgeries are succesfull and our presidents can pick up where they left off: running the country.

7 A beautiful young woman on the scent

Of course there are skeletons in closets in both series, skeletons that are dying to get out. And who better to unleash said skeletons than a beautiful young woman. Zoey Barnes is a reporter in HoC who discovers a lot of bad stuff about Underwood, with whom she had an affair. Hannah Wells is an FBI-agent in DS who investigates the bombing, with some very unnerving results.

Ah, the ex for whom you still harbour romantic feelings. Haven’t we all been there? No? Well, Remi Danton (former Chief of Staff) and Deputy House Minority Whip Jackie Sharp are in deep, in House of Cards. It doesn’t work out, so she marries a generic default guy, but ends up with Remi anyway. In Designated Survivor pretty boy Chief of Staff Aaron Shore and Special Advisor Emily Rhodes have the sparks flying all around, until, you know, shit hits the fan.

9 Scandal about pregnancy of the First Lady

Scandals tend to happen when someone is under scrutiny of the entire country, not to mention the press. First Lady Claire in HoC has had multiple off-record abortions (that you can see here), which almost cause a riot, but she manages to deflect it, like the lovely scheming mastermind she is. Designated Survivorbeauty Alex Kirkman became pregnant with her eldest when she just started dating Tom, so is he really the father of her son? This potential scandal is diffused quite quickly as well.

10 Presslady and speechwriter hook up

In House of Cards journalist Kate Baldwin hits it off with speech writer Tom Yates. The former speech writer in DS, Seth Wright, has some nice tension with journalist Lisa Jordan. I guess wordish, writish people tend to find each other, romantically or otherwise.

What is a president without his security detail? Unsafe. That’s what. Edward Meechum, Frank Underwoods main security guard and very… erm… close friend loses his life when Underwood gets shot. In Designated Survivor guard Mike is in hot persuit of a shooter, but he survives and is back on the job quite soon. Both heroes manage to kill the shooters.

12 Collegues of the young woman on the scent

In both series the young woman that is on the scent of a conspiracy has some collegues that aid her in her quest: her boss and a close male collegue/friend. In both series one of them is imprisoned after being set up.

Both Frank Underwood and Tom Kirkman decide to declare war at some point in the series. One major difference is that Frank does it to defuse another pending scandal, while Kirkman’s intentions are not quite that personal. 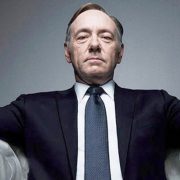 If you don't like how the table is set, turn over the table
1 reply