Netflix Original series Black Mirror is definitely a must see. Social media and advanced technology play a big role in this dark, yet surprisingly gripping series. Today we’ll take a look at one of the best episodes: Nosedive. SPOILER ALERT.

Bryce Dallas Howard plays Lacie Pound, a thirty-something woman in a very pastel looking futuristic version of the US. In the first shot we see the slightly overweight Lacie run at dawn, with something like a smartphone in her hand. We hear a sad piano melody play as backgroundmusic. As Lacie passes a group of other joggers, a guy says: “Hi, Lacie.” She squeels: “Hi!” and appears to send something with her phone to the guy. Soon we see what is it.

Apparently in the reality of Nosedive, everyone is on a kind of Facebook, slash Instagram-hybrid, rating each other with one to five stars. We cut to a scene of Lacie in her bathroom, practicing smiling and laughing at her mirror. In her eye is a kind of lens which projects information on the mirror about herself: Lacie, 4.243. This is her social score, as we discover soon after. Lacie lives with her brother in a small apartment, but her heart is on a new place. At a coffeeshop Lacie is still looking at the picture perfect posts of people she knows, rating them. The barista JJ offers her a free cookie, so Lacie replies with a high-pitched: “Sounds awesome!”, after which she and JJ send 5 star-reviews to each other. A picture of Lacie’s cup of coffee with a half eaten cookie next to it (she spits out the bite) gets her a number of 5 star ratings. They make her smile. Interacting with a disgraced co-worker, result in a few one-star ratings. To counteract this, she posts a picture of a toy she made with her childhood friend Naomi. Naomi, incidentally, has a 4.8 rating and a seemingly perfect life.

In real life we sort of seem to do everything for that kind of social rating as well. On social media we ‘like’ each others posts and we enjoy getting likes on our own. The more likes you get, the better it feels. Our succes is visible in the amount of followers on social media. This kind of social rating system is starting to take hold in other parts of life. In China there is a social rating system active already. With a lower rating, people have more difficulty to get loans, for instance. At the end of 2018 statistics say that already 17 million flights have been denied to people based on their rating and 4,5 million weren’t allowed to get a train ticket. It’s pretty scary that the world in Nosedive is closer than we think. The pretty lives people show on social media are not as pastel in reality. People choose to show the beautiful parts, like in this eposide. It’s not yet the daily task we see here, but life does seem to get more ‘online’ and fake, like Lacie’s disgusting coffee. How does it play out for her?

Lacie wants to opt for a nice apartment, but she needs a 4.5 star rating to apply. That evening Naomi asks her to be her maid of honor because of her post. This will be great for her rating, so she applies for the house and transfers the deposit. “She fucked Greg!” Lacie’s brother incredulously exclaims. Lacie starts practicing the perfect speech for the wedding, including a forced tear at the end. A fight with her brother about the fakeness of her life makes Lacie late for her cab to the airport and after she bumps into someone, her rating starts going down. From this point on the episode shows Lacie trying to make it to the wedding, all the while losing more points and getting increasingly more agitated.

At the airport she is denied a ticket because her rating isn’t high enough, so she has to rent a car. Things go from bad to worse. It becomes painfully clear that having a lower rating means that everything is more difficult and that the people around Lacie even rate her based on her lower rating alone. As it turns out, Naomi only invited her to the wedding because of her rating. “When I asked you to speak, you were a 4.2, okay?” Naomi says on the phone, “And the authenticity of a vintage bond low four at a gathering of this caliber played fantastically on all the simulations we ran.” She says Lacie isn’t allowed to come to the wedding anymore with a 2.6 rating.

In a world where it looks like everyone has a big social network, Lacie turns out to be totally alone. Breaking down completely and sneaking into the wedding, Lacie ends up loses all her points. (Roll credits: Nosedive.) When she’s arrested and put in a cell without her smartphone, she suddenly seems to experience… freedom. There is nobody to impress for a 5 star rating and there is no one to give a rating to. Losing everything she worked and faked so hard for, Lacie is finally free.

We wonder if we will ever be freed again of the social rating systems that imbedded themselves in our daily lives. We’ll just have to wait and see. 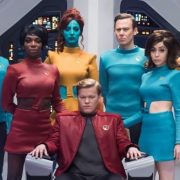 Stealing my pussy is a red fucking line!
0 replies

Perfectly balanced, as all things should be…