Blog - Latest News
You are here: Home / Both parties asked the court to drop the monkey copyright trial and you’ll...

Remember our piece about the monkey copyright lawsuit? We do! And we’ve been following the story a little. If you have been too, you probably know that PETA and David Slater eventually agreed to settle the matter in a way that would benefit the wildlife. And with that, we supposed the story was over.

Yesterday, David Slater announced that the trial is going on. Now, to refreshen your memories: the trial is basically PETA suing on behalf of a monkey. That, in and of itself, should have been the ridiculous part in this story. Hahaha. Nice media stunt, PETA, now go home. But it didn’t, and then it dragged on for years and ruined a mans life. After the settlement, you’d think that would be the end of it. We did. There was just some paperwork to be done: both parties had to ask the judge to drop the trial and that would be it.

Well, both parties did and now the judges decided on that request. They decided to deny it. The suit will not be dropped: the court heard oral arguments and is now moving on with the trial, as it sees a number of reasons to move on with the trial. The court document cites ‘institutional litigants’, strategic settlements to make precedent look more favourable than it really is and avoiding a court ruling as reasons, which may very well indicate that PETA isn’t going to like what the judge has to say about suing in the name of animals or claiming they have copyrights. In any event, the court case is on and the judges aren’t taking prisoners. 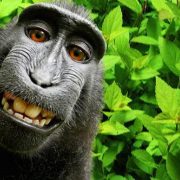 The law, lawyers and monkey business: how a selfie is ruining a photographer's life
0 replies